Our trip to capture Hadar our Stallion Day 1 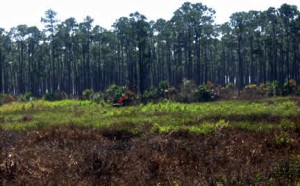 Dr. Fritz and I went out today, Wednesday May 16. to capture Hadar the outside stallion. It was a grey, rainy, cool morning. The plan was to use a tranquilizer gun, a front end loader and a lot of padding.

First, a trip to the Abaco Foods, Ltd. farm to meet with Paul Baker who oversees all management. He’s been instrumental in making the project even remotely possible. It would be the farm’s front end loader that he graciously permitted two of his men to use once we tranquilized Hadar. As a refinement, we were accompanied by Ron Simmons (Agricultural Manager) and Victor Bevans (a contractor up from Nassau) who followed us about three miles through the forest and out to the field in a sturdy four wheel drive flat bed truck. They could see where the action would be and they could get back to the farm quickly to bring the loader around.

Then we had two prep periods, one at the Preserve base to load equipment, and another before we set out into the field. The second period got the dart gun ready, darts loaded with tranquilizer, etc.

Jean and I took the tractor out alone beyond that point. Jean has been visiting Hadar more and more often, Hadar’s not really concerned about the tractor but he will spook if it gets too close.

We searched the area slowly for about half an hour, I was ready to give up and finally, there he was at the very end of his usual pasture. Near the forest, we could manage but if he ran right into the forest we wouldn’t be able to get him out. Jean maneuvered up wind of him, so that Hadar would turn his rump to me. Then followed a very long crawl on my knees through rain soaked cow grass, vines that grabbed at my knees, and small palms that gave some desperately needed cover. It took a half hour of crawling to get ready for the first shot. Without radios, it was hard to signal Jean to increase distraction, I didn’t want to wave my arms. Just as I was ready for the first shot that sharp old horse threw his head up and spun around to run, I missed him by inches.

There was one more dart. More maneuvering on knees. A long, careful crawl to large clump of ferns finally gave me good cover, I was within maybe 30’ of him and darned if he didn’t throw his head up, spin and run. I swear the dart flew through his tail hairs.

We’re pretty happy though, we learned a lot. He’s very consistent, I can get around him with great care and patience. We need one more person on the tractor to keep his attention. The logistics of communications, getting the front end loader on scene quickly and many other details all have been refined. We try again tomorrow.

This entry was posted in Current News. Bookmark the permalink.